First things first: Happy new year! I am sure 2016 will be a great year! Next up: DominantColor. It’s a project for calculating the dominant (hue) color in an image.This is something that took some research as I was building JeS Multi-Monitor Suite. The taskbar in Windows 7, 8 and 8.1 implemented a similar feature showing the dominant color as a highlight when you mouseover the taskbar icon. I now moved the logic into a separate library and put it on GitHub. It currently provides 2 algorithms: One that calculates the average RGB color (which is NOT the same as the dominant color in an image). The second one calculates a histogram of the hue values in the image, smooths it, and than takes the hue that occurs the most. Included is a little demo project showing you the hue histogram and the smoothed hue histogram: 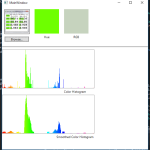 Check it out on GitHub: